Uncover the source of your anger

Search me, O God, and know my heart! Try me and know my thoughts! And see if there be any grievous way in me, and lead me in the way everlasting.

A rim fire ravaged a magnificent California National Park in 2013. This destructive fire seemed to be caused by a hunter who started an illegal fire that spread out of control. Imagine … this small fire that the hunter considered manageable burned over 250,000 acres!

Just a single flame in the wrong place and at the wrong time can quickly become a blazing inferno. Anger, hidden deep in the heart, can happen the same way. When hurt, injustice, fear or frustration smolder followed by the dry, hot winds of agitation, an angry inferno can quickly develop. If you find yourself losing your cool frequently, examine your heart to see if a deeper wound exists that gives rise to your anger. Fires of anger arise from four causes.

1. Hurt: Your heart is wounded.

Everyone has a God-given inner need for unconditional love. When you experience rejection or emotional pain of any kind, anger can become a protective wall keeping people, pain and hurt away. A biblical example of this is the sons of Jacob. Joseph was the father’s favorite – even making Joseph the famous “coat of many colors.” Feeling hurt and rejected by their father, the 10 older sons became angry and vindictive toward their younger brother. ...  “But when his brothers saw that their father loved him more than all his brothers, they hated him and could not speak peacefully to him.” (Genesis 37:4).

2. Injustice: Your right is violated.

Everyone has a knowledge of right and wrong, fair and unfair, just and unjust. When you realize that an injustice has occurred to you or to others (especially to those you love), you may feel angry. If you hold on to the offense, unresolved anger can begin to take root in your heart. A biblical example of this is King Saul’s unjust treatment of David evoking Jonathan’s anger. Jonathan, son of Saul, overheard his own father pronounce a death sentence on his dear friend David. ...  “Jonathan answered Saul his father, ‘Why should he be put to death? What has he done?’ But Saul hurled his spear at him to strike him. So Jonathan knew that his father was determined to put David to death. And Jonathan rose from the table in fierce anger ...” (1 Samuel 20:32-34).

3. Fear: Your future is threatened.

Everyone is created with a God-given inner need for security. When you begin to worry, feel threatened or get angry because of a change in circumstances, you may be responding to fear. A fearful heart reveals a lack of trust in God’s perfect plan for your life. A biblical example of this is, again, King Saul. He became angry because of David’s many successes on the battlefield. (Read 1 Samuel 18:5-15, 28-29.) He was threatened by David’s popularity and feared he would lose his kingdom. ...  “Saul was very angry … ‘They have ascribed to David ten thousands, and to me they have ascribed thousands’ … Saul was afraid of David because the LORD was with him but had departed from Saul.” (1 Samuel 18:8, 12).

4. Frustration: Your performance is not accepted.

Everyone has a God-given inner need for significance. When your efforts are thwarted or do not meet your own personal expectations, you sense of significance can be threatened. Frustration over unmet expectations for yourself or for others is a major source of anger. A biblical example of this Cain. Both Cain and Abel brought offerings to God, but Cain’s offering was unacceptable. Cain had chosen to offer what he himself wanted to give rather than what God said was right and acceptable. When Cain’s self-effort was rejected, his frustration led to anger, and his anger led to the murder of his own brother. … “In the course of time Cain brought to the LORD an offering of the fruit of the ground, and Abel also brought of the firstborn of his flock and of their fat portions. And the LORD had regard for Abel and his offering, but for Cain and his offering he had no regard. So Cain was very angry, and his face fell. … Cain spoke to Abel his brother. And when they were in the field, Cain rose up against his brother Abel and killed him” (Genesis 4:3-5, 8).

Probing into buried feelings from your past can be painful. Sometimes it might even feel easier to stay angry than to uncover the cause, turn loose of your “rights” and grow in maturity. Like a forest fire ignited by one small “controlled” hunter’s fire, a minor, unexpected disappointment or strain may flare an angry reaction that could devastate your life. Make every effort to discover the source of your anger and deal with it by releasing it to God in prayer with His grace and His help.

Lord, thank You for loving me. Since You know everything, You know the strong sense of (hurt, injustice, fear, and frustration) I have felt about (name or situation). Right now, I release all of my anger to You. I trust You with my future and with me. In Jesus’ name. Amen.

Which of the four sources of anger resonates most with you and your experience of anger? How so? 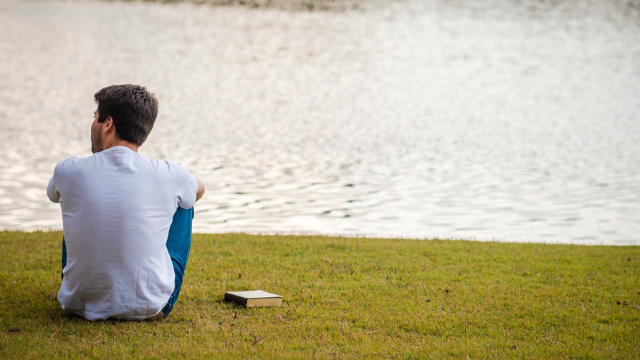 Are You Angry with God?

Why do bad things happen to good people? Why is there so much injustice in the world?